Directions, the following were done chronologically:

Using a dropper, my teammate squished and a few drops of red cabbage juice fell into the first cup which contained lemon juice. The color change that took place was what me and my teammates expected. The lemon juice went from yellow to pinkish red – the color of a peach – meaning that it was acidic. We used the pH scale above to identify the acidity of the lemon juice and everyone agreed that the level of acidity was somewhere between 1 and 2, so it was really acidic. This process was repeated for the remaining cups, below are the color changes and pH levels:

After finally identifying the pH levels of all the seven cups, we took the indicated cup of lemon juice and poured it into the cup of indicated bleach. The result was surprising to me, the color of the solution was similar to the bleach’s color, but slightly darker and it became warm. My team didn’t expect it, in any case of acids and bases, to become warm, but it did. The indicated baking-soda-water-and solution was then poured into the cup of indicated vinegar. Again, the reaction was surprising, the solution turned from pink and teal into purple and it exploded a tiny bit. The tiny explosion, or rather burst, was what was surprising. Three cups were left. We took the indicated cup of sprite and poured it into the toothpaste-and-water solution. Because the past two mixes surprised, we expected there to also be something new, but there didn’t seem to be any sort of noticeable and weird reaction. The solution just turned from light purple and teal to pink.

Directions (What we did):

Question: How does a sugar solution turn into rock candy?

*This is a hypothesis, everything said below is probable to be disproved.

The supposed result of the Rock Candy experiment is explanatory given its name; candy that’s firm as to be licked rather than broken or masticated. In usual cases of solutions, molecules of the solute disintegrate in the process of dissolving as to be attracted and bonded with molecules of the solvent, comprising the solution. The case of rock candy is probably homogeneous, sugar is the solute and liquid water is the solvent. In the experiment, the solution was slightly thick. It might’ve been caused by caramelization of the sugar, when sugar turns somewhat fluid, due to the hot liquid water when it dissolved. A thought is that when the solution rests and cools, the compounds of water and sugar has a chance of coming into contact with the item fixed in the middle of the cup (stick, string, etc.) and when it does, the compounds get stuck there. Gradually, more compounds run into the stick and the sugar molecules stack up, slowly forming sugar crystals. The probability of this same process happening to the walls of the object containing the solution is not unlikely either. So after a period of time, the surface of the solution – or the whole solution – might be crystallized. 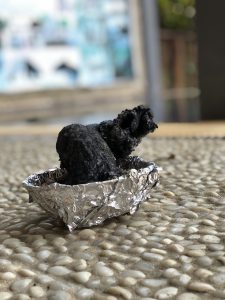 Everything set up by my team was the first attempt, we followed the directions given. A type of soft-looking bright gray to dark gray foam-like substance began forming at the edges of the mixture on the sand as the fire made by the match spread over it. It felt cotton-soft and would break into smaller parts when squished, also leaving blackish dust, like charcoal, on the hand. The formation of the substance began slow when the match was lit, but progressed throughout the hour of the experiment nevertheless. At times of the experiment, more alcohol was pumped onto the bowl’s top into the sand and mixture, and that seemed to have affected the substance’s formation speed, so the speed of the formation might’ve depended on the amount of alcohol there was. From my observation and perspective, sugar that was in the mixture might’ve been the leading cause of the formation of the soft substance as the composition of the mixture was mainly comprised of sugar, 20 grams to be exact, and the substance seemed to only form on edges of the sugar. In the first endeavor, the formation of the substance slowed down drastically halfway through the experiment even though alcohol was pumped onto the bowl constantly and soaking the mixture and sand, thus another bowl was set up with the help of our facilitator. My team’s endeavor in the experiment resulted in a short and wide pillar consisted of the substance and was slightly tilted in a direction. The change of speed formation might’ve been because there wasn’t a sufficient or sustainable-enough amount of alcohol soaked inside the sand before the experiment began. The supposed result or outcome other teams got was a serpent-like structure composed of the soft substance. The second endeavor, despite the first one, ended in a success as the formation speed was noticeably faster because there was more alcohol and by the time the hour of the experiment elapsed, there was the serpent-like structure as expected. It was then that I saw why it was called the way it was, “The Black Snake” because of the result.

For the past few weeks in Physical Science, we learned about Carbon and then we decided to do an experiment called the Black Snake! Below are some more details of the experiment if you are wondering. The paragraph above is a report from my perspective when doing the experiment.

Directions: From what I remember, the following was done chronologically:

Thank you for reading! Oh, here are some more photos from the experiment:

This year, there will only be 3 weeks of physical science instead of 6 in each round because normally there are 4 hours of essentials everyday and we have 5 essentials this year which means that we have to split an essential in half to fit all of it in; the other three weeks are for technology and multimedia. Despite that, we still had a great time learning the subject. This round, we focused mainly on matter. In the first half of the 3 weeks, we got into the basics of matter, what it is, then we went deeper into properties of matter, the types of properties, what they are, change in matter, and the types of change. We also learned how to identify them. The first week was like an introduction. On the second half of the 3 weeks, we looked into the building blocks of matter; atoms. We learned what matter is made of, the particles that make up atoms, and the parts of an atom. We spent the last week researching different topics related to physical science in groups and then presenting it. My group’s topics were quarks and atomic force. So quarks are the smallest building blocks of matter; they make up protons and neutrons which are the particles that make up the nucleus. The nucleus is the center of an atom, and the atom is what makes up matter. Atomic force is force that takes place in atoms, as said in the name itself. Even though we only had 3 weeks of physical science, we still learned a lot about some of the things related to it and I hope that we will keep doing so in the upcoming rounds. 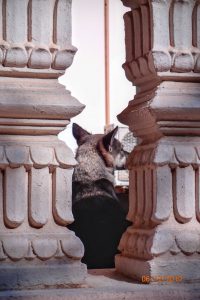